The Germania – The Niederwald Monument

In the best spot, on a small hill of the already high shore, a national monument has been erected, topped by a colossal statue of Germania. Standing in front of the Niederwald monument is impressive because of its sheer size. The entire facility is 38.18 meters high and weighs around 75 tons in total. The most striking and at the same time the largest part is the Germania placed on the upper plinth and visible from afar. It alone reaches a height of 12.5 meters and weighs around 32 tons. 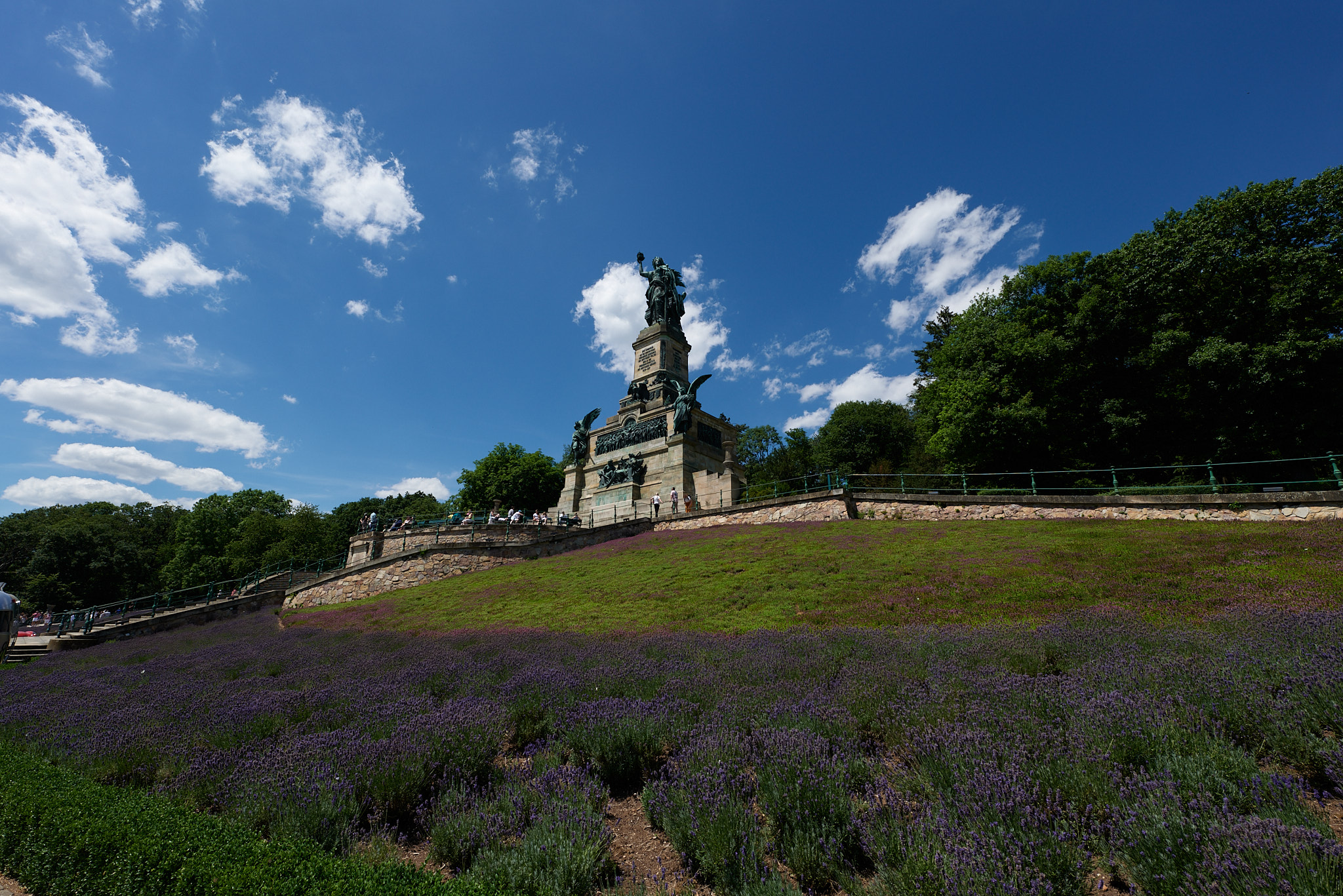 This statue is cast in bronze, resting on a sword with one hand and holding the German imperial crown raised with the other. Germania’s clothing is peppered with symbols that are considered typical of German culture. She wears a wreath of oak leaves on her head, while her robe is decorated with animals typical of myths and legends. You can see eagles, deer, ravens and dragons, among others. She also wears the imperial eagle on her chest as the unmistakable symbol of the German Reich. 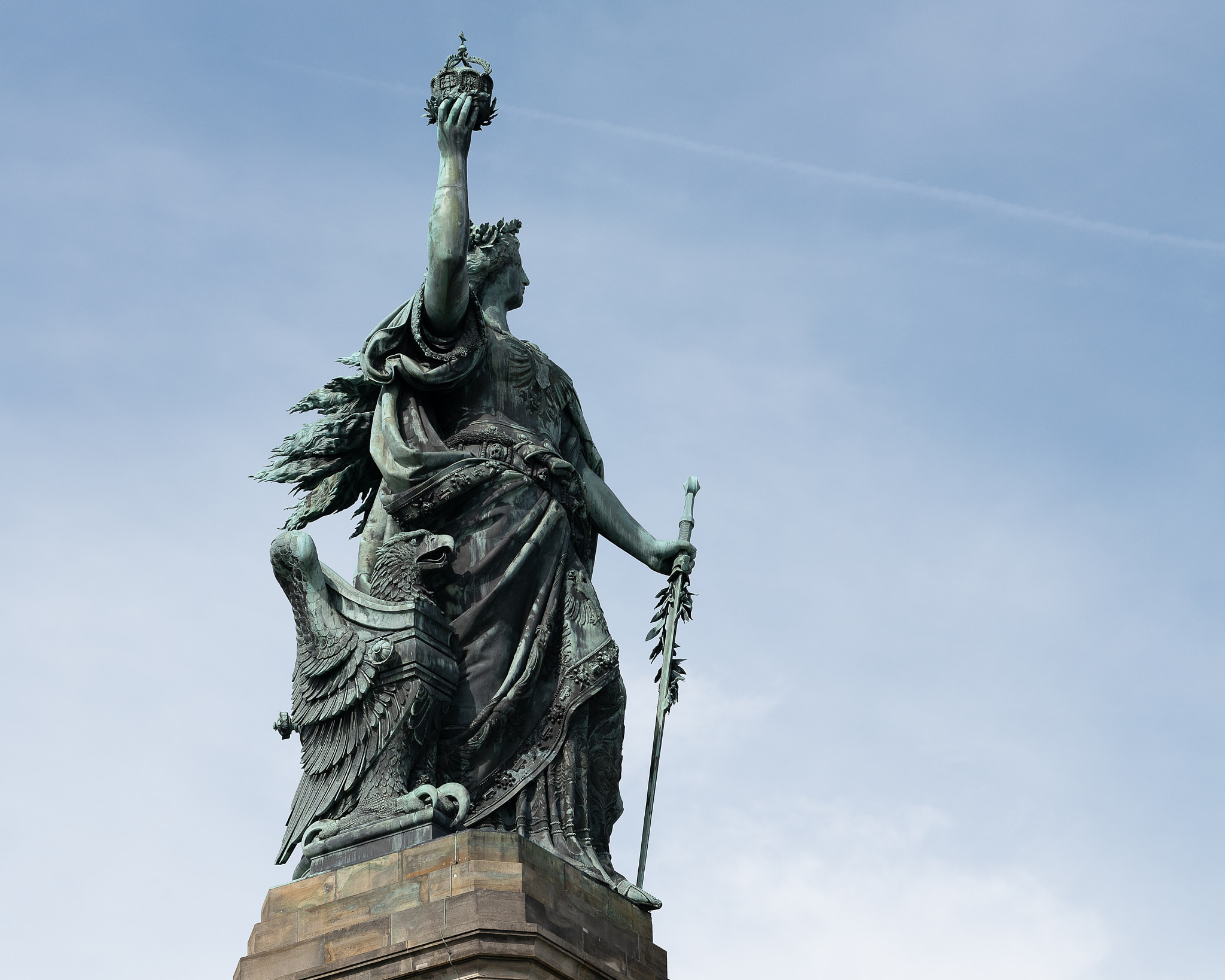 Below the statue is a bronze plaque on which one can read in huge letters: “In memory of the unanimous, victorious uprising of the German people and the reestablishment of the German Reich 1870-1871”. Below, on the widening part of the base, there are: an Iron Cross, a huge eagle and the coats of arms of all German states, including bronze relief plaques. On the obverse the main figures of the war of 1870/71, namely: in the middle Kaiser Wilhelm on horseback, in marching uniform and with the Iron Cross on his chest, received in 1813. Near the Kaiser: Bismarck in cuirassier uniform and with a scroll of parchment, on with a declaration of war, then Moltke with a map in his hand, followed by the figures of all the kings and dukes of Germany at that time, around whom the commanders and generals are grouped. In the background, representatives of simple soldiers stand out: a Prussian artilleryman with a cannon, a Hessian hunter, a pioneer, a Baden dragoon on horseback, foot soldiers, hussars, uhlans and even a whole pontoon park. All people shown are life-size. The text of the famous song “Die Wacht am Rhein” is engraved in granite under this plaque.

To the left and right of the main relief are two other figures that are supposed to symbolize war and peace. The figure on the left, pointing towards France, is a winged genius who was considered a protective spirit in ancient Rome. He blows a trumpet with his left hand and holds a sword in his right. The fact that this is not raised but lowered is interpreted as a sign of victory. Peace is symbolized by an angel placed on the right, German side. His attributes are a cornucopia and an olive branch, which have been understood as symbols of prosperity and peace for centuries. 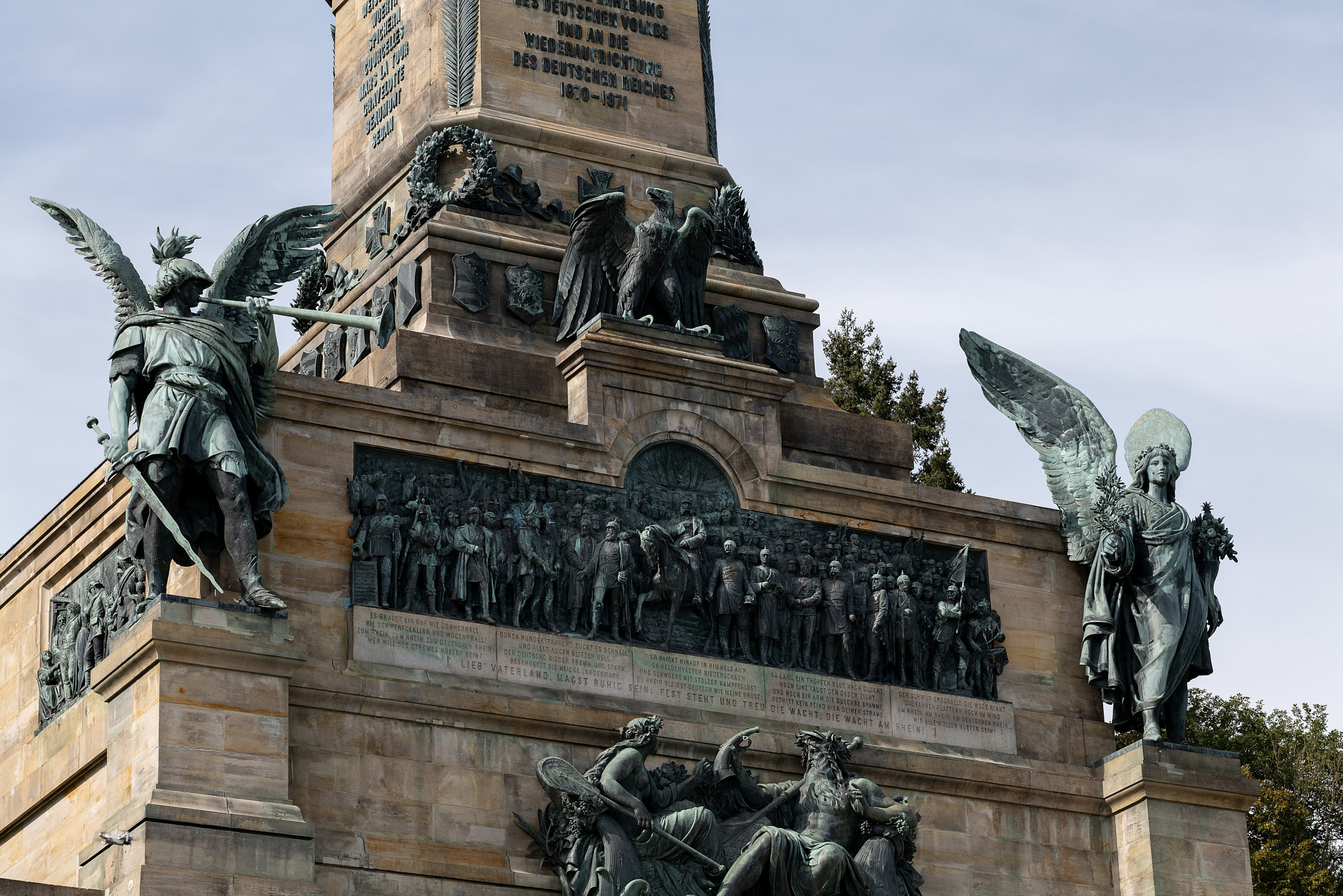 Very touching scenes are depicted on the side walls of the plinth: on the left – separation, on the right – post-war dates. On the left panel are depicted: a son in the guise of a Bavarian cavalryman bidding farewell to his parents and family; The younger brother is portrayed as asking his father to let him go with the older one. The characters and facial expressions are impressive; even touches on the expression of a dog sensing the beginning of a long separation. In the center a Prussian infantryman – the groom says goodbye to the bride; she leaned her head on his shoulder and sobbed. A militiaman is also shown on the same panel being brought to the sailors: here the father says goodbye to his wife and children. Scenes of the separation of son, bridegroom and father are depicted in three separate groups on this panel. 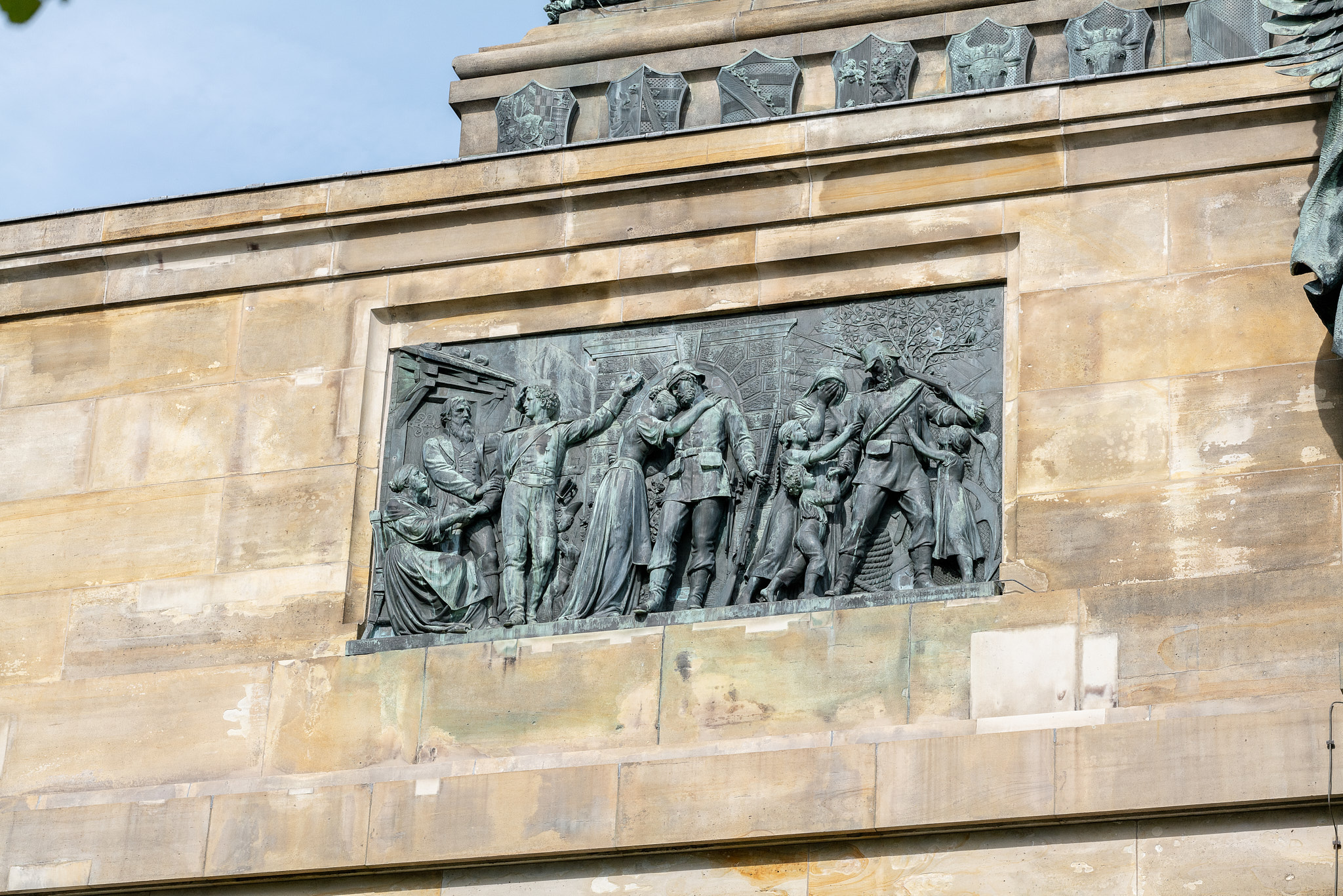 Accordingly, on the other side panel are scenes of a date after returning from a hike. The parents are happy about their son, who has been decorated with medals and has matured in hard military service; all around – children jumping for joy; the groom hugs his bride and looks at the sky, both crying from emotional overload; eventually the Landwehr managed to serve safely and return to his family.

The last important element of the monument is at the base of the monument: Here it is shown how “Father Rhine” hands over a guard horn to daughter “Mosel”. This alludes to the conquests made in the course of the war of 1870 and 1871, which transformed the Rhine from a border river into an inner-German river. 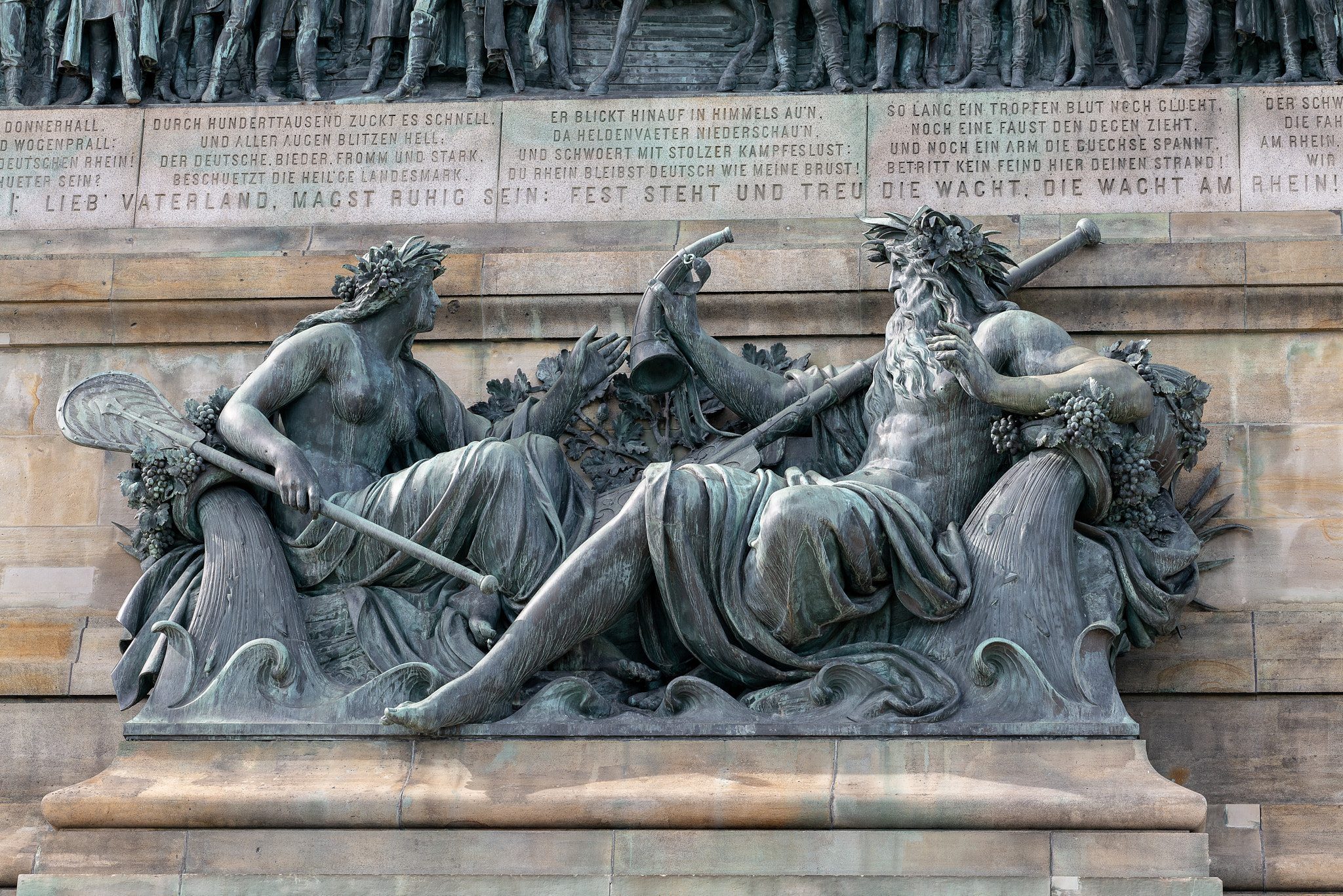 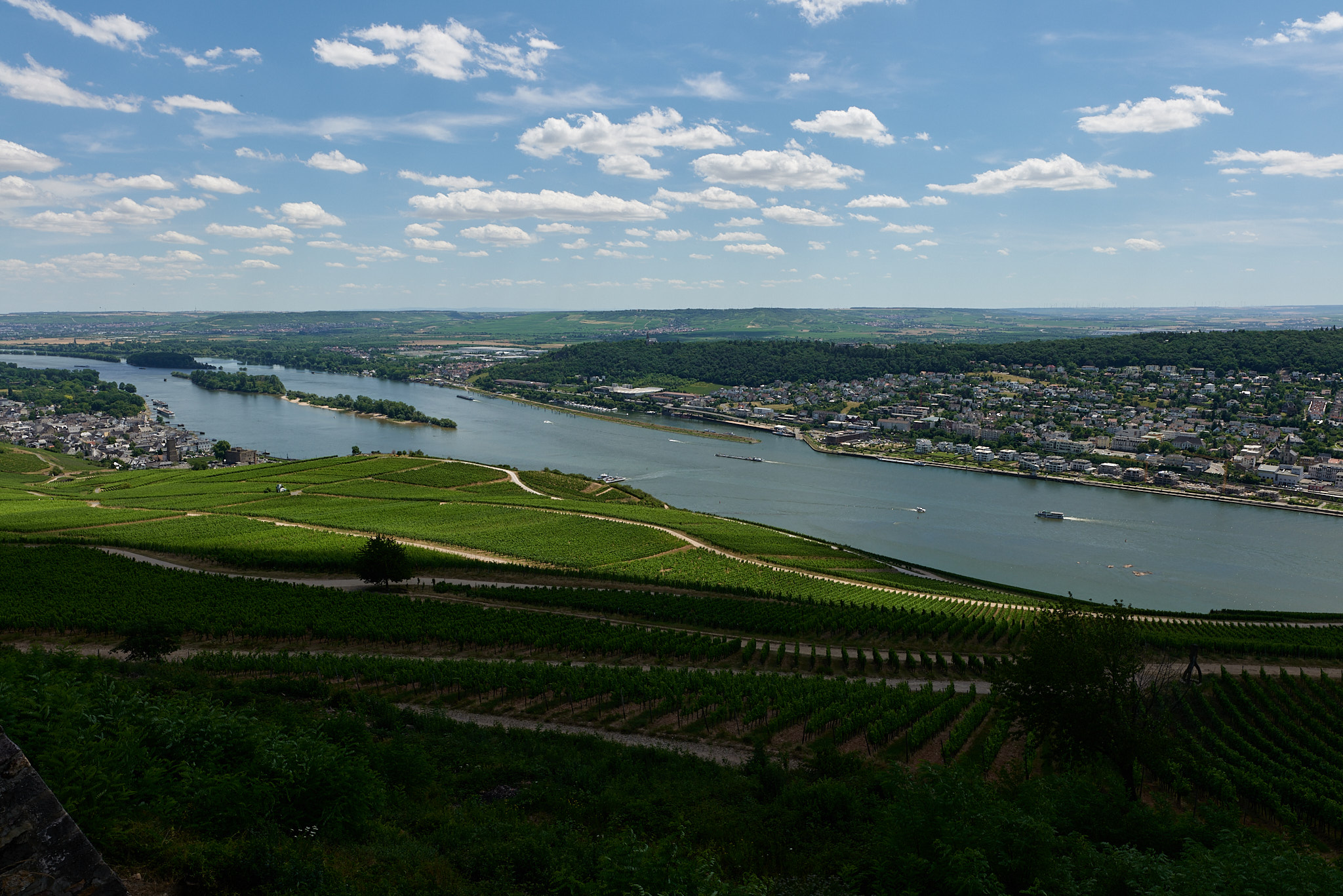 The general idea and location of the monument can only be described as successful. This is truly a monument to commemorate the fallen, reward the living, and edify posterity. The monument was founded on September 16, 1877, and opened on September 28, 1883, in the presence of emperors, kings, princes, dukes and representatives from all of Germany.

Copying the text is only possible with the name of the author and an active link to www.k24wi.de